Review: Steve Mednick – Where Are The Bodies Buried?

Steve Mednick – Where Are The Bodies Buried? (Independent) 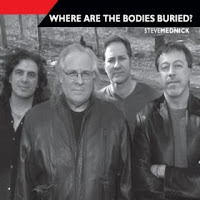 Steve Mednick is an old-school folkie working in a contemporary setting. His new album “Where Are The Bodies Buried?” (subtitled “Problems In Democracy: Volume III” - and it’s his tenth CD release since his debut in 2006) continues his thoughtful probing of the issues that confront America, though most have a worldwide relevance. A self-confessed Dylan and SSN&Y nut, his political bent is very much shaped by and connected to ‘60s ideals, and his songs (and the questions they ask) will be familiar to anyone interested in the social history and music of the time. Although, as already mentioned, Mednick is a contemporary writer, and his specific interests very much lay in the here and now.

As for songs, he’s a prolific and talented songwriter, with a good ear for melody, composition, and arrangement. “Liberty Bells Are Calling” opens proceedings, an acoustic lament that mourns loss and nudges for justice. “Wayward Prophets” is self-explanatory, and includes some choice harmonizing and female vocals, and guitarist Billy K and the rest of the band shine throughout the 15 tracks. I’ve no idea if this is the best album to discover Steve Mednick, but it’s a thoughtful, literate collection, all the same.
www.stevemednick.com
Tony S.