The Minor Leagues: North College Hill to be released 31st Jan. on Datawaslost... 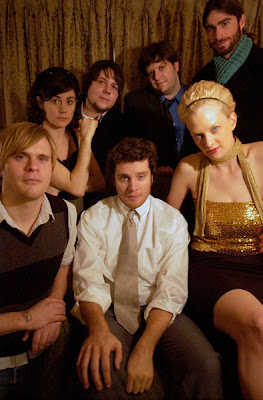 North College Hill is the new album from The Minor Leagues, the latest in a string of releases from the Cincinnati seven-piece to pair stinging melancholy with insidiously catchy melodies. The Minor Leagues' last two records covered the end of a relationship and the end of the world in overblown concept-album fashion, and this new album continues the streak with ten songs of bittersweet rust-pop about North College Hill, lead singer Ben Walpole's crumbling Midwestern hometown. The band paints a baroque portrait of the neighborhood-as-history, detailing childhood memories in a faded palette of strings, bells, and guitar jangle.

The entire record delights in nostalgia, with Brill Building arrangements filtered through the drive and sing-along choruses of 90s Brit-pop, all set against a backdrop of lush instrumentation. Beginning as an attempt to capture a certain place, North College Hillbecomes more about holding on to lost time, with nods to 19th-century flu outbreaks, Nell Freudenberger, and Falco along the way. And while the band's past work has earned them comparisons to recent popsmiths like Belle & Sebastian and The New Pornographers, their charm, witty lyricism and ear for detail continue to set them apart from the rest.