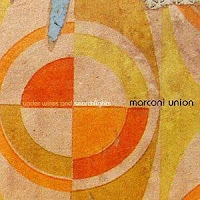 The once duo (of Richard Talbot and Jamie Crossley), now trio (add Duncan Meadows) have over the years submersed themselves in the worlds of music, art installation, theatre, film and TV commercials with their hybridisation of dub, jazz, ambience and electronica. “Under Wires and Searchlights” blends radio controlled elegance, stark and melancholic moods, cinematic jazz and subtle trip-hop, and is equal parts Angelo Badalamenti, Barry Adamson and Massive Attack.

“Distance” (cited by The Sunday Times to be “one of the most successful ambient albums of recent years”) has an overtly optimistic aura to it, which is more emotional and cohesive in direction where occasional mildly claustrophobic tones are outweighed by the immensely cathartic. Subsequent Marconi Union releases have received a wealth of mainstream media compliments and a new album is planned for later this year.
www.marconiunion.com
www.justmusic.co.uk
Willsk