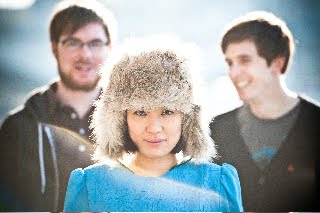 “When a band is as good, as versatile and as daring as Nedry, you hope the wider world will stand up and take notice.”
Huw Stephens, BBC Radio1

On 12 March 2012 Nedry, whose distillation of advanced rhythmic structures, low frequencies and raw human tones stand uniquely at a fascinating sonic crux of leftfield, club and indie juncture, are to release their new album, In A Dim Light' on Monotreme Records.

BIOGRAPHY
Nedry are a trio by way of London, Osaka and Bristol whose distillation of advanced rhythmic structures, low frequencies and raw human tones stand uniquely at a fascinating sonic crux of leftfield, club and indie juncture.

Drawing on the gothic undertones of David Lynch – and at points, absorbing T.S. Elliot’s ‘Four Quartets’, vocalist Ayu Okakita revels in ruminations urging acceptance of the shadows; to permit the darkness to settle around her.

British bass music clings to few modern regulations. As grey areas become inviting, zones of conflict are transformed into fertile new ground. Nedry are dictating a path that recognizes no genre, no structures, no rules. Ripping progressive dance culture out of the bedroom producers’ smoke stained confines and planting it resolutely on the live stage, Matt and Chris utilize MPC, laptops, guitars and synths to create a deep, thoughtful musical space.

Nedry are dissolving the distance between this cutting edge and hungry audience. Splicing a band aesthetic with the ‘heads down and thumbs up’ bass craft of the UK, they gift the faceless revolution of dark music an inviting visage within which we can all dwell.

As comfortable on the dancefloor of London clubs like The Boiler Room or FWD>> nights as they are onstage at The Great Escape or Barcelona’s Sonar electronic showcase – Nedry are the hypnotic, tender and evolving exponent of the delightful mutation that we face each day in Britain’s refreshingly wobbly musical culture.