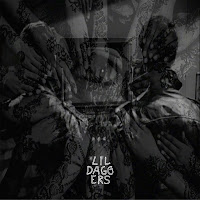 Lil Daggers - S/T (Song, By Toad Records)
Welcome to the new indie kids on the block, and they’re from Miami. In the past I’ve welcomed The Postmarks, and, er, Lansing-Dreiden anyone? If we stretch the list and add solo artists, there’s Chan Marshall (Cat Power to you and me); and that's about it. So, what do Lil Daggers bring to the table then?

Well, for one thing, they build their sound in a most powerful way, so by the time you’re approaching the end of a track like "Past Due" or "Slave Exchange", you’re well into what they are trying to do, which appears to be to give everyone a good time. Subtler tracks such as "Pignose" and "Give Me A Pill" don't have the same edgy feel to them and are a little more organized perhaps, and pay their dues to old school garage rock, with a smattering of R&B and a healthy dose of psyche-rock thrown in.

The fact it took me half of the album to realize that the drawl of the lead singer was a chap (well, hello to you, Johnny Saraiva) didn’t in any way diminish what I’d already heard. I filed it away and decided that the charm of the music was responsible for my mistake, and just continued to enjoy the (quiet) mayhem that Lil Daggers produce - or perhaps it was because earlier I’d been playing the marvelous Warpaint, and this isn’t a million miles from their style. There is also a grand finale; out on its own is "Pair Of Lives", which quietly, and smoothly, and ever so beautifully, puts the album to bed.

Lil Daggers, they know their past, and it looks like they’ll be contributing to the future, and not just in Miami, either. This is a great starter album to what should be a long career for them, in the studio, in the arena, and in your life.
http://songbytoadrecords.com/
Kev A.