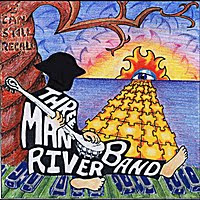 Three Man River Band - I Can Still Recall (Independent)
“I Can Still Recall” is the Three Man River Band’s debut album. The quartet - Jimmy O'Keefe (guitar, words), Aaron Mirenzi (banjo, words), Nathan Hesse (keyboard, vocals) and Keith Brown (percussion) – play a form of traditional Americana, and names like Pete Seeger, Bob Dylan, Old Crow Medicine Show and Robert Johnson get a mention in their biography. That seems straightforward enough, but a few spins of the record reveals some classic indie inspiration. Certainly, lead track “The Devil Speaks to Mary” appears to employ the same sort of haunted country acoustics used on the first Tarnation records. On the surface, an effect that referenced old time roots music, yet it seemed perfectly at home on the cutting edge 4ad label.

Whatever their influences, it’s a faultless beginning, and provides a subtle contrast to the following “Mr. Kool”, which could’ve been recorded 40 years earlier and been the result of “Future Blues” Canned Heat messing with “Workingman Dead”. Like many of the tracks on “I Can Still Recall” it rattles and rolls, and works its way into the subconscious. Indeed, there is an abundance of memorable songs here. “Floatin' on Down” is wonderfully ramshackle, but like a backwoods John Fogerty tune, it comes with a purpose, and massive hook, and “Mattawoman-Beantown Blues” might have a title to forget, but its boondocks Randy Newman vibe sticks. There’s not a moment wasted on the eight minutes of “Zebra in the Jungle”. Its lo-fi groove builds convincingly, allows the musicians to flex a little muscle and seems to be the missing link between The Black Crowes, REM and The Band.
http://www.facebook.com/threemanriverband
Rob F.