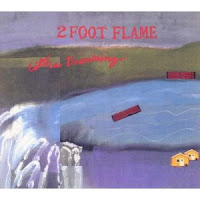 2 Foot Flame – Ultra Drowning (Matador)
Ultra Drowning are not for the faint of heart as guitars and keyboards overload in a cacophony of sound reminiscent of a harshly ambient Sonic Youth strung out on Draino, or a less structured Diamanda Galas dragged up on Grace, Janis and Patti.

For all the madness, layered noise and general weirdness, there are real songs scattered around, telling stories of disappointment and suffering which make 2 Foot Flame a challenging but always worthwhile experience. New sonic blues for an apathetic generation, then? Quite possibly.

If alternative music has joined the mainstream then 2 Foot flame are about a hundred yards from the bank, whirling ‘round pretending to be aeroplanes, but with no discernable intention of getting even a little wet.
LB (1997)

Run On – No Way (Matador)
New York’s Run On are poppy noiseniks on a mission. With their second album “No Way”, they mix melody and drones in equal measure to produce a record that has some interesting tracks but is never completely satisfying.

New member Katie Gentile adds a new dimension to the band after the departure of David Newgarden, especially on the violin led “Anything You Say”, which might be the album’s high water mark. Other songs to look out for are the trance-like “Dance Away”, the Nick Drake cover “Road” and the impressive six-minute “Sinnerman”, which almost brings the proceedings to a close.

Not a bad record by any means, just slightly disappointing.
LB (1997)