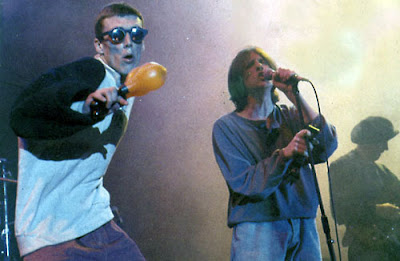 The Happy Mondays will re-form for a month-long tour in May, singer Rowetta Satchell has confirmed.

Rowetta, also an X Factor finalist, told BBC Radio Manchester the group had been in talks for a long time, but made the final decision to reform last week.

Although the Manchester band have reformed previously, this will be the first time the original line-up has played together since 1992.

"We want to put on a really good show," Rowetta told Darryl Morris.

All seven of the original line-up met last week to "see if they could sit in a room together", Rowetta said, referring to the band's acrimonous past.

She said the drive to bring the original members back together had come from lead singer Shaun Ryder and his manager.

"We decided it would only be special and work if it was the total, original line-up," she said.

"We're all really excited. They are my family, these boys; I've really missed them... and I'm sure they've missed each other."

The band, who were at the forefront of the Madchester scene, formed in 1980, with Ryder as their frontman.

They reformed twice, most notably in 1999, but split again in 2001, with Paul Ryder vowing never to perform with his brother again.

A further incarnation of the band followed in 2004, with only Shaun Ryder, Bez and Whelan from the original line-up.

Rowetta said the band would be rehearsing throughout April, but denied there were currently any plans for them to support the reunited Stone Roses at Heaton Park.

"It's up to the Roses. As long as we've not killed each other by then, we'd be up for it."