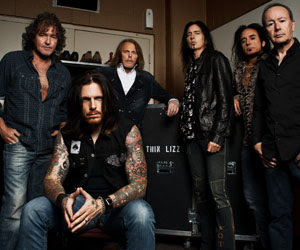 Thin Lizzy at De Montfort Hall: 23/1/12
Old Father Time can be a spiteful bugger. Imagine it’s 1976, you’re 18 years old and the “Jailbreak” album and “The Boys Are Back In Town” single have made Thin Lizzy your new favourite band. The group, all five years or so older than you, are the hottest band on the circuit, ripping through tours, upstaging headliners, and finding fans amongst popsters, rockers and punks alike. Now, over 35 years later, you’re down the front at De Montfort Hall, two thirds of the band are considerably younger than you are, and the one original member of the band (as near as damn it) you’ve got a clear view of, looks the best of the bunch. 61 years old next year, Scott Gorham looks like he’s been munching the monkey glands with gusto, or perhaps there’s a portrait in his attic looking particularly shite.

There’s genuine affection between band and audience, the latter whipping up a ‘Lizzy’ chant as the lights dim, and the smiles on faces tell their own story. It’s also worth mentioning, this isn’t an audience just made up of hoary old geezers; the Thin Lizzy name still carries enough credibility to get all ages through the door. As for the show, well, it almost transcends critical analysis. There’s obviously a void where Phil Lynott should be, but the crowd and the band are in it together, and desire and enthusiasm – on both sides – carry the night. Needless to say, the hits get played, from “Bad Reputation” and “Dancing In The Moonlight” to “Boys…” the light show sparkles and everyone goes home happy and contented.
http://www.thinlizzyband.com/
Rob F.