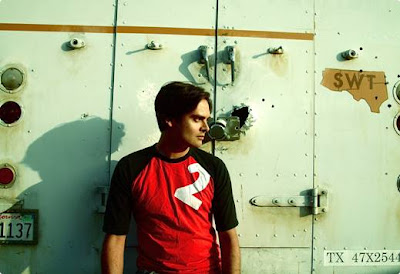 Taking cues from Blur, Ride, Elastica, “Take My Forever” pays tribute to the music of his youth.

“…a flight through the clouds. …listen to this album over and over again.” – The Aquarian

Unlike so many musicians that become painters, the Los Angeles-based artist Faris McReynolds found success as a fine artist first. Showing his work in galleries before he was even out of art school, McReynolds thought his career path was mapped out for him. He was wrong.

McReynolds, who also makes music as the minimalist avant-garde pop project One Finger Riot, takes a totally different songwriting approach as alter-ego Exdetectives on Take My Forever due February 14th from the Post Planetary record label.

"I’m paying tribute to the music of my youth,” McReynolds says about the record. “Britpop bands like Blur, Ride, and Elastica, first wave indie rock like Dinosaur, Jr. and also The Beatles which I didn’t hear until after I’d gone through punk. This music is about being straightforward and letting the songs do the work. It’s loose, casual and direct. Hopefully something I didn’t plan for comes out of that approach.”

Take My Forever’s first single “The Lawn” is a droning wash of guitars and live -- as in not programmed -- synthesizers. “I wanted it to be this mass of sound that stays in place all the way through the song. No dynamics, just this wide swirl of textures,” McReynolds says. “It’s got loud distorted guitars, yet it manages to come off as mellow. I’m proud of that because guitars can get old really fast.”

Created in a quick two-week fit of low-budget recording (vocals were tracked in a storage closet), McReynolds plays all of the instruments (save for the drums) on Take My Forever. It’s a radical approach to making a record that bears itself out all the way down to the title itself. As McReynolds states, “The title of the album says, ‘Here, you can fucking have it. Make of it what you will.”