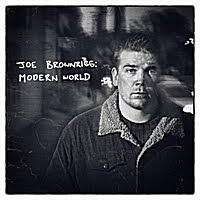 Joe Brownrigg - Modern World (Independent)
When this project was suggested to Joe Brownrigg he didn’t have any shortage of stuff to write about. The Ottawa native is a father of two, a longtime participant on the local music scene, and worked some of the more ‘interesting’ districts of Ottawa as a police officer. For this album he was instructed by producer Matt Ouimet to write a collection of songs as quickly as possible, just to see what would happen. They were obviously both pleased with the results. The nine songs that Brownrigg composed became “Modern World”, his debut solo record.

Though very much a modern singer-songwriter, it’s artist like James Taylor and Jackson Browne that seem to have provided inspiration. Brownrigg’s a wordsmith and understands a songwriter’s prime purpose is to get their message across, whether it’s a straight-ahead story, or something more abstract, like ideas or emotions. Brownrigg repeatedly hits his targets, and Ouimet frames his words in retro keys (“Ebb and Flow”, “Here to Stay”), gentle strings (“Hope”, “Over and Over”) and upbeat pop-rock arrangements (the title track and “Here to Stay”). My current favourite is the near addictive “Running Hot on You”. If ever a track was custom made for grown-up radio listeners, it’s this one. C’mon chaps, get a copy or three to BBC Radio 2 today!
http://www.joebrownrigg.com/index
Rob F.