Geoffrey Rush is named Australian of the year... 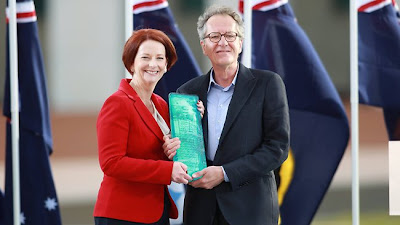 Oscar-winning actor Geoffrey Rush has been named Australian Of The Year in recognition of his dedication and achievement in the arts.

Prime Minister Julia Gillard presented the star with the accolade, the highest award bestowed in his native country, during a ceremony in Canberra.

The 60-year-old's film credits include The King's Speech and the Pirates of the Caribbean series.

In 1997, he became the first Australian-born actor to win an Oscar.

The star took home the prestigious trophy for his portrayal of David Helfgott, a pianist who suffers a psychological breakdown, in the movie Shine.

He has been nominated three times since, for his roles in Shakespeare In Love, Quills and The King's Speech.

Organisers of the Australian Of The Year accolade said Rush had achieved the "rare international distinction of the Triple Crown - an Oscar, a Tony and an Emmy".

According to the Sydney Morning Herald newspaper, as Rush accepted the top Australian prize, he compared the arts to spiders.

''We are told that at any given moment we are no further than a few metres away from a spider - this statistic is now also true for the arts,'' he said.

''Unfortunately, like spiders, it means we can be invisible - some people, too many, don't know we're there.''

Born in Toowoomba in Queensland, Rush now lives in Melbourne.

Last year, he was made president of the newly-established Australian Academy of Cinema and Television Arts.

The actor has also won three Baftas and in 2011 was given the Helpmann Award, which also recognises artistic achievement and excellence in Australia's performing arts sector.