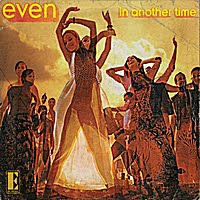 Even - In Another Time (El Reno Music)
Nearly four years since their last album, Australian guitar pop legends Even return to the fray with a 12 track collection that plays to all their strengths. They’ve always been first rate melody merchants, and “In Another Time” will surely cement their reputation; it’s chock full of fine upbeat tunes, vigourous vocals and possesses more hooks than a Japanese trawler captain in an exceptionally irresponsible mood.

Singling out particular tracks for praise may be problematic, simply because there’s so much strong material to choose from. Ashley Naylor and the band are on top form and great tracks tumble from the speakers with alarming regularity. They kick off with “Satellite/Sunlight”, at six and a half minutes, hardly typical power pop fare, but it’s only one of seven tracks over four minutes in length. I’m sure it will remind some listeners of Oasis at their most epic, but goodness, the hooks come thick and fast, and it never shirks its emphatic Motown-esque sing-a-long duties. “No Star” follows it, and fans of classic pop songwriting will be celebrating tonight. After that it’s “Temperamental Flower”, a wonderful, borderline hazy psyche-pop track that was originally released as a single in 2009, but could have been written at any point since 1967, and so it goes on.

Fans of The Posies circa “Frosting…”, “Rocks” period Primal Scream, the Faces stomp, the Stones’ swagger, Big Star’s Memphis take on the Beatles, Not Lame Records, indeed anyone searching for a musical reason to get out of bed in the morning, or an a rock ‘n’ roll excuse to stay up late, should buy “In Another Time” pronto. Thank me later.
http://www.even.com.au/
Rob F.