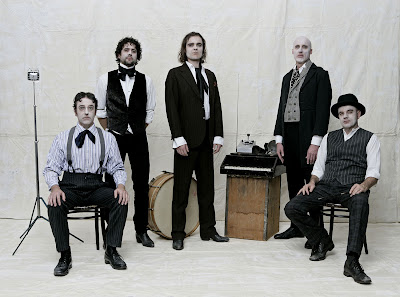 Spaghetti Western Orchestra makes a triumphant return to the UK with their hilarious celebration of the iconic collaborations between Sergio Leone and Ennio Morricone. This highly theatrical show features classic themes from The Good, The Bad and The Ugly, For A Few Dollars More and Once Upon a Time in the West as well as ingenious recreations of the saloons, spittoons and shotgun-slinging atmosphere of the 'Wild Wild West'. As part of a major UK and Ireland tour Spaghetti Western Orchestra comes to De Montfort Hall for just one performance on Wednesday 7th March.

Dressed in period attire against a dramatic scorched sun backdrop, five brilliant musician performers play over 100 'instruments' which range from the conventional to an incredible array of everyday objects including playing cards, coat hangers and a packet of cornflakes. The musical arrangements are accomplished and endlessly inventive, summoning the power of an entire orchestra and using foley (sound effect) artistry to recreate the punch-ups, gun-shots and jangling spurs evoking the glorious movies that made Clint Eastwood a star.

"An endearing, impressive show". The Guardian, ★★★★

Spaghetti Western Orchestra burst on to the international scene at The Montreal Jazz Festival in 2007 and has garnered critical acclaim and energetic fans whenever it has played at International Festivals throughout the world. Two previous visits to London's Southbank Centre in 2009 and 2010 were sold out, the show featured on the achingly cool Later With Jools Holland in 2009 and also on the BBC Proms in August 2011.

"Take the magnificent music of Ennio Morricone, add five multi-talented, unashamedly theatrical Australians with impeccable comedy timing and let them loose on 100 instruments and you have some idea of Spaghetti Western Orchestra. A joyous celebration." London Evening Standard ★★★★