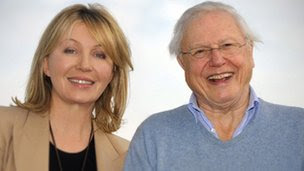 Desert Island Discs is celebrating its 70th anniversary with 44 different versions of the radio programme across the BBC's entire UK network.

Sir David Attenborough appears on BBC Radio 4's version for a fourth time - a record he shares with Arthur Askey.

The special editions will feature the public's favourite tunes and memories.

Over the 70 years the great and the good have imagined life on a secluded island; Beethoven's Ninth Symphony has been the most popular musical choice.

Je Ne Regrette Rien by Edith Piaf has been the most frequently chosen non-classical tune which guests said they would have on the island with them.

Amongst the 2,881 luxuries chosen to be taken on the island are 183 pianos, five trombones, the Albert Memorial and a cheeseburger machine.

They will include Chris Seery, who first heard Alive by Pearl Jam when he worked in the US and played it while training for the New York Marathon.

The song has since taken on a whole new meaning for the married father-of-two from the Suffolk countryside.

In 2010 he was diagnosed with a rare form of bowel cancer and despite operations, many cycles of chemotherapy and an initially positive outlook for recovery he is terminally ill at 46.

"This time the words have great meaning as I am determined to do everything to beat the odds and stay alive for the sake of my boys and the joy of being alive," he said.

First broadcast on 29 January 1942, the programme was conceived and presented by playwright and novelist Roy Plomley, who each week asked a guest to choose eight songs, a book and luxury item for their imaginary stay on the island.

The "castaways" are then invited to discuss their lives and reasons for their choices.

Kirsty Young, who has been presenting the programme since 2006, told the Radio Times she has "probably the best job in the world" and would like to be doing it "until I'm 85".

She said of her castaways: "Although the premise is phoney - sitting in a studio talking to each other - I don't think I'm deluding myself when I say you can establish connections.

"I'm constantly surprised, and delighted, by their frankness and honesty."