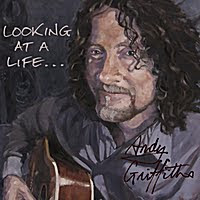 Andy Griffiths - Looking At A Life (Independent)
With plenty of real-life experience behind him, as well as a two-decade career traipsing the cover-band circuit, Andy Griffiths debut album probably felt like a long time coming. Although the journey Griffiths has taken has been circuitous, there’s no doubting the hard work that goes into a music career that remains on the bottom rungs, and there’s also no denying the available time to practice and hone a talent can be advantageous. On “Looking At A Life” he emerges as a fully formed singer-writer, with no shortage of tales to tell, and an assured musical ability to make the best of his words.

He brings both gritty gravitas and sure-fire pop hooks to his compositions, and it’s names like Tom Petty, Elvis Costello and Graham Parker that seem the most suitable when comparisons are to made. As for definite influences, different songs do carry stylistic nuances. For example, “You Fill Me Up” wouldn’t have sounded out of place on the first Traveling Wilburys’ collection, with its mix of Beatles dynamics and American twang, and “Hooked” is a wonderful power pop track that I feel I should have discovered via one of those amazing Sound Asleep compilations that used to appear so regularly. Maybe best of all is “Bare Bones”. It incorporates a pleasing rolling rhythm, the band turn up their amps and it’ll take you back to that special period in the late ‘70s when Petty, Nick Lowe and their ilk were considered new wave.
http://www.andygriffiths.ca/
Rob F.