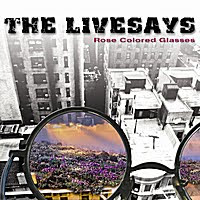 The Livesays - Rose Colored Glasses (ECHOXS)
The Livesays are fronted by vocalist-guitarist-songwriter Billy Livesay who, for twelve years, toured with Clarence Clemons' band Temple of Soul, cutting a couple of albums and sharing stages with the great and the good. He can also be found playing in Slow Ride with original Foghat bassist Tony Stevens. That’s some resume, and on “Rose Colored Glasses” Livesay illustrates just why other musicians seek him out.

The band, which also includes drummer Eddie Zyne (Hall and Oates, the Monkees, Rick Derringer, Foghat and many others) are based in Florida, but it’s no surprise that it’s to the New Jersey shoreline they take their inspiration. Bruce Springsteen and Southside Johnny are both easy reference points as the band whip up a blues-groove, rock ‘n’ soul vibe that’s topped by Livesay’s sandpaper croon.

There’s no doubting any of the performances on “Rose Colored Glasses”. They open proceedings with the title track, a big song with Livesay and the band providing so much energy. When they slow things down on tracks like “I Waited Too Long” and “Until You Kissed Me Like That” they’re just as intense. They end the record with a muscular version of Dylan’s “My Back Pages”, a song covered by many, including fine versions by The Byrds and Steve Earle. This one’s up there with the best of them.
http://www.facebook.com/TheLivesays
Rob F.