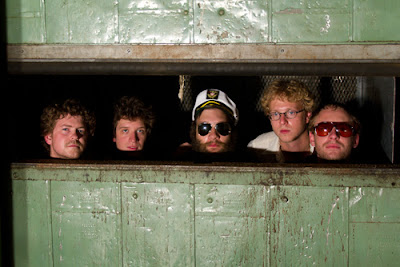 “‘Main Street’, the first single from Deer Tick's new album, Divine Providence, finds the Rhode Island rockers hitting a comfortable sweet spot where the romantic rhythms of girl-group pop, the raspy punk of Nirvana and the rootsy, blue-collar poetry of Bruce Springsteen all blend together into something fresh and new.” –Rolling Stone
“This one is much closer to the reckless abandon of their live shows…it’s served with such a knowing grin that you can’t help but love it.” –Uncut

Deer Tick is proud to announce the UK release of their new album ‘Divine Providence’, available on April 2nd via Loose Music.

‘Divine Providence’ is the Rhode Island quintet's fourth album in just five years, and is the first release recorded in their home state. It's a follow-up to their fantastic ‘Black Dirt Sessions’, which New York magazine called "flat-out great," and inspired the Late Show with David Letterman to give the band its network television debut.

After years of critics mainly praising them for their "folk" and "country" sounds and not touching on their other musical styles, the band wanted to make a record that was true to their live set (which has gained some notoriety): raw, loud, heartfelt, and completely uninterested in whatever the hell the rest of the music industry is up to. The results are unlike anything you’ve heard on a Deer Tick album.

To produce this record, the band recruited the team of Adam Landry and Justin Collins, who produced McCauley's side-project Middle Brother's debut album. Distorted guitars aplenty, guitarist Ian O'Neil and drummer Dennis Ryan take lead vocal duties for the first time on record, you can practically smell the sweat and the beer! And even hear a guitar or two break somewhere in there! It's got a little Exile, it’s got a little In Utero, it’s got a little Nilsson Schmilsson, but it's 100% Deer-F**king-Tick in their purest, and most carefree form.

The songs are there. The delivery is in your face. There's no studio magic. There's no hiding the fact that Deer Tick is just five regular dudes. This record may rattle your thoughts and it may make you think differently about Deer Tick, but at least they didn't make the same album four times in a row, right?

The band will be embarking on a European Tour throughout March with a London date confirmed for The Garage on April 4th.