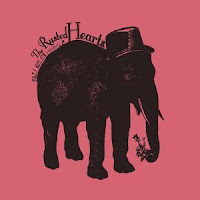 Miles Nielsen - Presents The Rusted Hearts (Rotown Records)
The idea on this sophomore album is that Miles Nielsen lets you get to know his five-piece band. That’s no bad thing, but despite his intention, Nielsen still takes centre stage on almost every track. There’s a tendency amongst some contemporary singer-songwriters to go one of two ways; it seems they either want to shout at you, or whine away for three minutes at a time. The title track falls into the latter category, and "The Grain" doesn't help me make up my mind. It’s an uptempo, spikier number, with big backing and boisterous chorus. Quite fine stuff in its own way, actually, but it does have just a little too much going on.

We get back to the basics on "Dear Kentucky (You're Killing Me)", and it is more obvious that, despite the brevity of this song, we have something real and true here, simple but meaningful lyrics, with a gentle caress of heartfelt love/hate for the bluegrass state. Another two nuggets in the mix are "Cold War", which is followed by "Overrated". Both are quality songs and wouldn’t have sounded out of place on a Willie Nile record. The band doesn’t appear to put a note wrong, either. It could still go either way, but add the smart-sounding "Sirens" to the list of good things happening here, and I’m happy to wish them only the best.
http://milesnielsen.com/
Kev A.