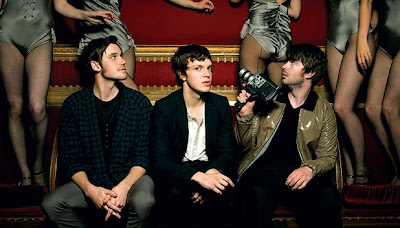 Friendly Fires have told BBC 6music that they are off to Sweden for some "exploratory music making"; some of which could, if strong enough, feature on a successor to last year's 'Pala' LP.

Says singer Ed Macfarlane: "We tend to write quite good music in quite secluded, quite bleak places, in minus 25 degree weather. Sweden, log cabin, pretty bleak".

It seems he's even willing to sacrifice inter-band relations (and at worst, his own life) in the name of innovative songwriting, telling 6music that the group aim to emulate in the studio the close conditions of one very ill-fated Stanley Kubrick movie.

"I think we are trying to force on an element of the film 'The Shining'", he says. "We're trying to alienate ourselves into a world of music alone and see what we come up with".