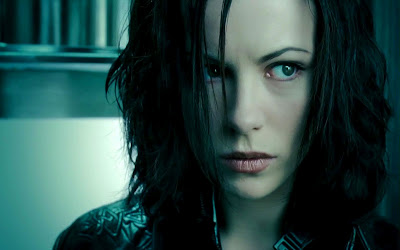 The fourth Underworld movie, which sees the return of Kate Beckinsale, has topped the US film chart on its debut.

Underworld Awakening made $25.4m (£16.3m) this weekend, according to official estimates.

Beckinsale starred in the first two vampire action movies in the franchise but bowed out of the third before making her comeback.

"She is such a force. Her character - you just can't take your eyes off her. I know the character is very dear to her as well, and she just kills it," he said.

Red Tails, about the first black fighter pilots to serve in World War II - the Tuskegee Airman - entered the chart at number two.

The movie, executive produced by George Lucas, made an estimated $19.1m (£12.3m), well above expectations according to its studio, 20th Century Fox.

"I believe what George Lucas has stated all along - this is an important story and a story that must be told," said the studio's Chris Aronson.

Stephen Soderbergh's Haywire was fifth with takings of $9m (£5.8m).

Rounding out the top 10 were the Disney re-release of Beauty and the Beast at six, Joyful Noise at seven, Mission: Impossible - Ghost Protocol at eight, Sherlock Holmes: A Game of Shadows at nine and The Girl with the Dragon Tattoo at 10.