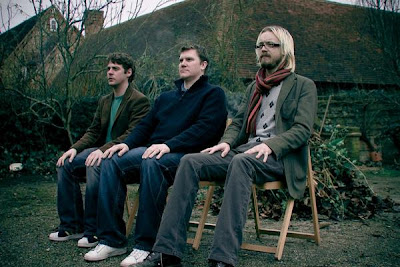 ‘Crown And Treaty’ is quite simply stunning. Ambitious, literate, dramatic, heartfelt, beautiful, artistic and capable of moving you to tears, it is the sound of a band taking a quantum leap forward, throwing every ounce of their belief, passion and dreams into the creation of a truly special body of work.

A rumination upon history and our place within it, ‘Crown And Treaty’ is the result of songwriter Tim Elsenburg’s change in circumstances, living alone for the first time in many years with enough money finally from a small publishing deal to actually devote himself full-time to making a new record. With the ability to use every creative moment in the pursuit of his vision, ‘Crown And Treaty’ is a masterpiece; the sound of a band sealing their artistry with wax and signet ring to send it out into the world.

“I wanted to talk about history, and the idea that we're all chained to it; all our ideas, actions, wants, needs... everything, are tied to what's gone before. We might not see it consciously but everything we do is coloured by the past, for better or worse, and to be able to break away you have to recognise it and make your peace. You have to crown it. Make a pact with it, and move on.”

Having recorded ‘Twice Born Men’ in his shed, this time Tim was living and working in a tiny bungalow in the country. And as he watched the seasons turn outside the windows and often had to stop recording as the birdsong intruded onto the tape, he knew the shape of this new album was going to be bigger and more ambitious in every respect.

“I've always wanted to make a record and throw practical considerations to the wind; to let my imagination run riot, and make music with all the stuff I can hear in my head, without having to worry about how we're going to play it live, or how it might be received after a previous record. And this time, I wanted to make it in bold strokes... less smudging... primary colours. Basically, I wanted to make a record that sounded like a million dollars for next to nothing. My physical view, from the window, had opened up. This record was going to have the same feeling.”

And how! The previous shades of Nick Drake, Scott Walker, Elbow, The Blue Nile and John Martyn that have infused Sweet Billy Pilgrim’s sound have been expanded and driven to new heights. Each and every song on ‘Crown And Treaty’ is an unfurling, revealing gem; a beautiful, moving, uplifting treat.

From ‘Joyful Reunion’ with its glorious marching beats, tales of Emperor Charlemagne and epic, swelling finale, through the choral singalong of ‘Brugada’, to the delicate beauty of ‘Blood Is Big Expense’, this is the sound of Sweet Billy Pilgrim stepping out of the shadows and establishing themselves as one of the most exciting surprises of 2012.

Tracks such as ‘Archaeology’, which reveals its pop heart amidst Sylvian-esque sonic experimentation and ‘Kracklite’ which blossoms from its initial Portishead-meets-Talk Talk stately grandeur into a driving guitar stomp reveal a band whose talents have exploded. Swirling throughout are mercurial hints of Spiritualized, the Beach Boys, Vaughan Williams and Bon Iver, traces of Steely Dan, Prefab Sprout, Wilco and Tom Waits – but this majestic brew is mere background to something truly magical, a distillation of atmosphere that creates a whole new world to explore.

Tim’s songwriting and production talents, with an obsessive attention to detail, have found shape in the careful hands of band members Anthony Bishop, Alistair Hamer and new addition to the group vocalist Jana Carpenter. Together, they have delivered in ‘Crown And Treaty’ a glorious body of work that will stand the test of time.

To download one of the album’s standout tracks, just log on to the band’s website and revel in the sounds of ‘Brugada’. Sweet Billy Pilgrim will also be headlining the Borderline as part of the HMV ‘Next Big Thing’ gigs on February 6th. More live shows will be announced soon.