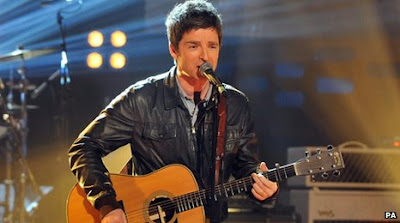 Noel and Liam Gallagher are among the nominees for this year's NME Awards.

Noel is nominated for best solo artist and best album, but his brother Liam has fared less well. He's in the running for villain of the year.

He faces competition in the category from David Cameron, Nick Clegg, Lady Gaga and Justin Bieber.

Liam's band Beady Eye, who formed after Oasis split in 2009, are also nominated for worst band at the ceremony, which takes place on 29 February.

One Direction, Muse and Coldplay are also shortlisted for the award.

Noel Gallagher has already been revealed as the winner of this year's Godlike Genius prize.

He is also nominated for hero of the year, alongside Noel Fielding, Alex Turner, Matt Bellamy and Dave Grohl.

It faces competition from The Horrors, The Vaccines and Arctic Monkeys - who have seven nominations in total.

The Sheffield band are also up for best album and best live band.

Drummer Matt Helders said it was "good to be recognised" at the event.

"We're up for all the big ones - we're very happy," he said. "We had a lot of fun making Suck It And See and it's great to be up for best live band."

The group are up against Bombay Bicycle Club, The Horrors, Kasabian and Muse for the best British band trophy.

Azealia Banks, who signed a major label record deal earlier this month, is nominated for dancefloor anthem for her single 212.

She faces competition from Katy B, Foster The People, Justice and Metronomy.

There are also categories for best TV show, best film and best festival - where Glastonbury takes on T In The Park, Reading and Leeds, V and Bestival.

Comedian Jack Whitehall will host this year's ceremony, which will feature live performances by The Vaccines and Kasabian.

The 2012 NME awards take place on 29 February at Brixton Academy.