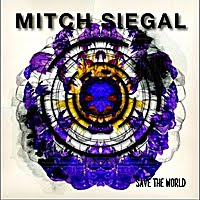 Mitch Siegal - Save The World (Independent)
Mitch Siegal is a Chiropractor from Florida who treats patients with spine and neck problems. In his spare time he raises money and writes music for the Songs of Love Foundation in New York, an organization that creates personalized songs for sick children all over the USA. Which neatly brings us to Mitch Siegal’s other career, the one that probably doesn’t pay the mortgage or feed the family, but is clearly close to his heart.

“Save The World” is his second album of original songs. Whether his albums are a natural progression of his charity work, or his prime musical focus, I’ve no idea, and in many ways it matters not a jot. Siegal is a regular performer in his home state and I’m sure he’ll be selling the majority of his CDs to audience members, though his sound and style is universal. His songs feel heartfelt and honest, and he repeatedly hits his targets, whether he’s writing about natural (in)justice, love and loss, or more abstract topics. There’s a sunshine lilt to much of the material, which is no surprise considering his location, and the best tracks on “Save The World”, the Coldplay-esque “Till Now”, the vibrant “Rose Marie” and the new-wave flecked “I'll Never Learn” all readily transcend the local singer-songwriter tag.
http://mitchsiegal.com/
Rob F.