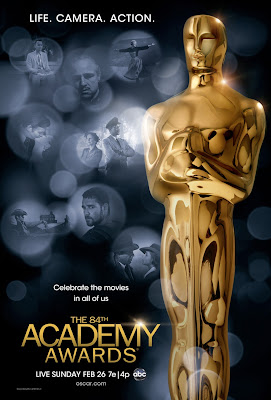 War Horse, The Artist, Moneyball, The Tree Of Life, Midnight In Paris, The Help, The Descendants, and Extremely Loud and Incredibly Close complete the best picture category.

Meryl Streep and George Clooney are nominated for the best acting prizes.

Hugo, the story of an orphaned boy living inside a giant clock in a French railway station, was followed closely in the nominations list by silent movie The Artist, which had 10 mentions.

France's Michel Hazanavicius received nods for writing and directing the comedy, while his wife Berenice Bejo was named in the best supporting actress category.

It is Oldman's first nomination, after more than 30 years on the big screen.

The British star said: "You may have heard this before, but it has never been truer than it is for me today: It is extremely humbling, gratifying, and delightful to have your work recognized by the Academy, and to join the celebrated ranks of previous nominees and colleagues. Amazing."

Streep, who received her nod for her portrayal of the former Prime Minister Margaret Thatcher in The Iron Lady, has now been nominated for 17 Academy Awards - more than any other actor.

It means she pulls further ahead from joint second-place holders Katharine Hepburn and Jack Nicholson, who have 12 apiece.

She has won twice, for Kramer vs Kramer and Sophie's Choice.

Other contenders in this year's best actress category were Glenn Close (Albert Nobbs), Viola Davis (The Help), Rooney Mara (The Girl with the Dragon Tattoo) and Michelle Williams (My Week With Marilyn).

Hugo did not receive any nominations in the acting categories, mainly being recognised for its technical achievements - including art direction, film editing and visual effects.

Woody Allen picked up a nomination for best director for his movie Midnight In Paris, along with Terrence Malick for The Tree Of Life and Alexander Payne for The Descendants.

Octavia Spencer and Jessica Chastain will go head to head for the best supporting actress prize for the latter film.

Melissa McCarthy and Janet McTeer complete the category for their roles in Bridesmaids and Albert Nobbs respectively.

British star Kenneth Branagh will vye for the best supporting actor title, after playing one of his childhood idols in My Week With Marilyn.

"It was a rare honour to play Sir Laurence Olivier," he told the BBC. "To be recognised by the Academy for doing so is overwhelming. I'm absolutely thrilled."

Christopher Plummer completes the shortlist, for the movie Beginners, in which he plays an elderly father who comes out of the closet.

With a career that spans 60 years, Plummer's work largely went unrecognised until two years ago, when he was nominated in the supporting actor category for his portrayal of Leo Tolstoy in The Last Station.

If he wins this time, the 82-year-old Plummer will become the oldest ever actor to receive an Oscar, surpassing Jessica Tandy who was 80 when she was named best actress for Driving Miss Daisy.

Kung Fu Panda 2 was recognised in the animated film category, along with A Cat In Paris, Chico And Rita, Puss In Boots and Rango.

As always, there were some surprises. Steve McQueen's controversial film Shame, starring Michael Fassbender as a sex addict, was notably absent from any of the nominations.

We Need To Talk About Kevin and Drive, both of which have proven popular with voters at other awards ceremonies, were also missing from the Academy's longlist.