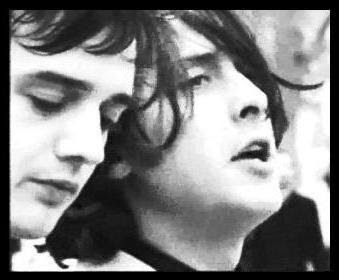 LIBERTINES DOC DIRECTOR OFFERS EXTRAS VIA PLEDGE PARTNERSHIP
The company behind new Libertines documentary 'There Are No Innocent Bystanders', Pulse Films, has teamed up with PledgeMusic to offer fans access to all sorts of extra material filmed by director Roger Sargent when he followed the band on their brief 2010 reunion, which climaxed with their sets at the Reading and Leeds festivals.

The film is due to be screened at various Academy venues around the UK in March before going on general release in April. Fans can pre-order the DVD version and other related content, including a live EP, artwork, and all sorts of extra stuff via the Pledge website, which is offering a number of different packages in different price ranges. The Pledge initiative has enabled Sargent to delve deeper into his footage and make lots of extra bits and pieces available to fans.

Says PledgeMusic MD Malcolm Dunbar: "The Libertines are a hugely important band and we are extremely pleased to be able to help them connect with their loyal and committed fanbase for this fantastic new project. The fact that we have already reached our original target in such a short space of time demonstrates the appetite out there for this new film and highlights the viability of getting fans involved at an early stage".