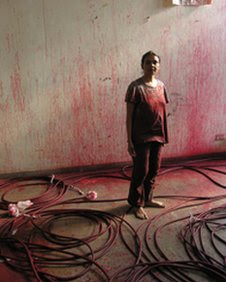 Seven artists from around the world have been shortlisted for the UK's largest visual arts prize.

The Cardiff-based Artes Mundi promises "action and performance" as a common link between them.

Those competing for the £40,000 prize are from Cuba, India, Lithuania, Mexico, Slovenia, Sweden and the UK.

Artes Mundi chief executive Ben Borthwick praised their "exceptional quality" and hoped audiences would engage with the exhibition in October.

'Flamboyant to the intimate'

Mr Borthwick, who joined from Tate Modern in 2010, has moved the competition from spring to autumn to coincide with other visual arts events including the Turner Prize and the Frieze Art Fair.

"We are delighted with the exceptional quality of this shortlist which was drawn from a very strong field of nominations," he said.

"I look forward to welcoming the artists to Wales and creating an exhibition in October that will give audiences the opportunity to engage with the most exciting international contemporary art."

The British name on the shortlist is visual artist Phil Collins, 41, who was born in Cheshire and is a past Turner prize nominee.

His art has taken him to unrest in cities from Baghdad to Belgrade and includes using popular culture concepts ranging from TV to music videos.

Past projects have included a seven hour disco-dance marathon made in Palestine and working with former reality TV participants in Turkey.

Collins also created an indoor drive-in cinema with 15 secondhand cars in a gallery in Berlin, where he now lives.

Artes Mundi - awarded every two years - was established in 2002 and supports contemporary visual artists from around the world who are still gaining international recognition.

Organisers describe the shortlist as ranging "from the flamboyant to the intimate" with "action and performance" being the common threads that link the artists.

"Shortlisting for Artes Mundi has been an honour - and a responsibility to be taken seriously," said Mr Kreuger.

"Almost 600 artists were nominated this year, and it was a huge challenge to whittle these highly accomplished individuals down to just seven.

"We have chosen seven very different but equally talented artists, of different generations and from all across the globe, to exhibit at National Museum of Art this autumn."

Some of the artists look at specific cultural or historical contexts while others engage with broader themes of human experience.

A major exhibition of work by the shortlisted artists will take place at the new National Museum of Art in Cardiff from 6 October for 14 weeks.

The winner will be named by an international judging panel midway through the exhibition in November.

All other shortlisted artists will receive a new award of £4,000 each.

In another development, one of the runners-up will be invited to present a solo show at the Mostyn contemporary art gallery in Llandudno in 2013.