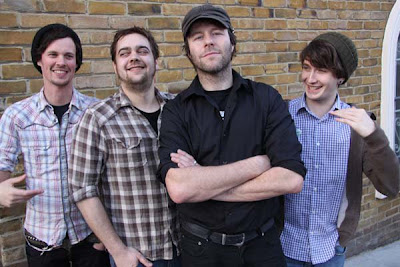 Devonian roots-punk ensemble, Crazy Arm, embark on a short UK stint ‘The Leap Of Faith tour’ in March alongside good friends, Apologies I Have None and Great Cynics. They also hook up with Indiana US country singer, Austin Lucas, for a couple of shows, with Crazy Arm appearing as Austin's backing band on a number of songs.

The band’s second album, 'Union City Breath', was released in October last year. Much like its predecessor, 'Born To Ruin', it has been very well received nationwide and throughout mainland Europe by fans and critics alike. Produced and engineered by Peter Miles (The King Blues, The Computers, Sonic Boom Six), the album is a triumph of punk rock energy, alt. country vitality and rabble-rousing honesty.

Not easy to categorise, and all the better for it, Crazy Arm's sound is an accumulation of decades of influence and inspiration: rooted in hardcore/punk, ‘60s protest folk/country and Springsteen-esque classic rock’n’roll. They combine this with a grass-roots political overview that embraces anti-war, anti-fascist and pro-community activism.

Reviews for 'Union City Breath':
'Blisters with energy' – KKKK Kerrang!
'You need Crazy Arm' – 5/5 Big Cheese
'A triumph from start to finish' – 9/10 Punktastic
'Delivered with a fired-up passion' – Rock Sound
'Never faltering from the pinnacle it attains from the off' – Punk News
'A patchwork blanket of musical bliss' – Room Thirteen
'This is the band to watch at the moment' – Rhythm Circus
'Supremely confident' – Sputnik Music
'Album of choice to represent Britain on the punk scene' – Alter The Press