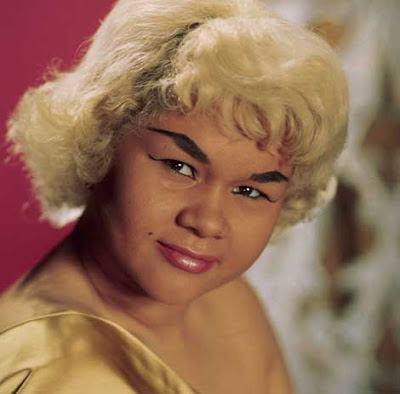 The late soul star Etta James has reached her highest ever position in the Billboard album charts, following her death last week, aged 73.

The Best of Etta James rose from number 162 to 46 on the Billboard 200 - even though figures were collated only two days after James's death on 20 January.

Previously, albums by the soul and blues singer had peaked at 68, with At Last, in 1961.

In total, sales of James's albums increased by 378% on the previous week.

According to Nielsen SoundScan, 30,000 copies of her albums were sold in the week following her death, compared to just over 6,000 copies the previous week.

James's 1997 hits collection Her Best has reached number 59 on the Billboard 200 while At Last has re-entered at 96.

Despite performing from an early age, fame came late to the singer, who struggled with addiction, but latterly won six Grammys - including a Lifetime Achievement award in 2003.

At Last and I'd Rather Go Blind are arguably her best-known songs. Her version of I Just Wanna Make Love to You was famously used in a TV advert.

James died at Riverside Community Hospital in California, with her husband and sons by her side. She had been undergoing treatment for leukaemia.

Members of the public will be able to pay their respects to the singer on Friday, when her body will lie in state in Inglewood, Los Angeles.

A private funeral will take place on Saturday in nearby Gardena, with a eulogy by Reverend Al Sharpton. A number of celebrities are expected to perform at the service, but no details have been released.