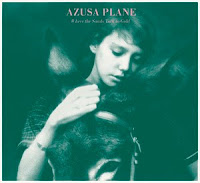 Azusa Plane – Where the Sands Turn To Gold (Rocket Girl)
“Where the Sands Turn To Gold” is a retrospective two CD and DVD package complied in memory of Jason DiEmilio (aka Azusa Plane). DiEmilio suffered from chronic Tinnitus and Hyperacusis; aural conditions brought about by extreme sound exposure. He committed suicide aged 36 in 2006. Whilst DiEmilio’s music is obviously quite personal and insular, there are experimental rites of passage and homage to be paid. Influences are drawn upon, such as Spacemen 3, Velvet Underground, The Smiths and Belle and Sebastian, and Lou Reed’s “Metal Machine Music”

CD1 comprises extended atonal and drone exercises and slabs of solid distortion and controlled feedback, interlaced with the temperate “Live At Leeds” which proves a refreshing wash and “Every Wave Has Its Own Integrity” has an almost Jan Hammer-esque ambience to it. Apart from the occasional forays into noise, CD2 is a more accessible affair and sonically less abrasive. A place in which the haunted tones of “A Magnetic Breakthrough” and “Ode To the Mountain Goats” can hang upon swirling repetitions and the playful blips of “The Last of The Famous Electronic Playboys” can nestle inside their effervescing dust.

Azusa Plane was a prolific musician and the DVD features a further thirty-minute live set and 65 MP3s which include rare tracks, an interview with Jason and unreleased live and studio recordings. The expansive booklet contains essays, thoughts, reflections and memories of DiEmilio's life and musical output. Azusa Plane RIP.
www.rocketgirl.co.uk
www.myspace.com/azusaplane
Willsk