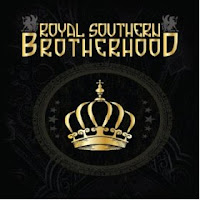 Royal Southern Brotherhood – S/T (Ruf)
Collaborative projects between independently well-known artists (or ‘Supergroups’ as they are sometimes optimistically referred to) can be a hit and miss proposition, but they never lack interest. Presumably the ‘Royal’ tag as applied here is a (hopefully tongue-in-cheek) reference to the presence of Devon Allman and Cyril Neville, members of two of the most esteemed families in Southern American rock and roll; but the inclusion of rhythm section Charlie Wooten (bass, ex-Woods Brothers) and Yonrico Scott (drums, Derek Trucks Band, Greg Allman Band) and guitarist/singer Mike Zito does little to detract from the overall gravitas. With three established vocalists and two top notch guitarists there’s plenty to build on around here, and although there’s no discernible effort to break new musical ground all play to their respective and collective strengths.

As the singers go, Neville sounds unsurprisingly more soulful, Allman rockier and Zito slightly edgier, but all have strong, rounded voices, which bring out the best in their own material and work well in combination. The playing throughout is robust blues-rock in the main, enlivened by flashes of funk, but always solid and committed, and rarely clichéd or predictable. The best songs are generally penned by Allman Jr., ‘Left My Heart in Memphis’ and the emphatic ‘Gotta Keep Rockin’’ being particular stand-outs; but Zito/Neville co-writes ‘Moonlight Over the Mississippi’ and the plaintive ‘Ways About You’ work well too. ‘Fire on the Mountain’ is a nice surprise – a song which didn’t work over-well for the Grateful Dead given a deserved second life in the band’s sympathetic re-reading, while instrumental finale ‘Brotherhood’ signs off with a gentle flourish. Overall, a decent debut from an interesting project that should impress further as it finds its feet.
www.rufrecords.de
Neil B.