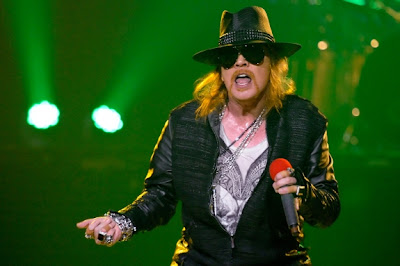 Guns N' Roses frontman Axl Rose has declined his entry into the New York Rock and Roll Hall of Fame saying he does not feel wanted or respected.

In an open letter, Rose, the only original member still in the band, said: "I strongly request that I not be inducted in absentia."

In a statement, the Hall said: "We are sorry he will not be able to accept his induction in person."

Guns N' Roses are due to be inducted into the Hall of Fame on Saturday.

Although Rose has since replaced all the band members, it had been hoped the induction would bring together the original line-up.

Speaking in an interview with news agency The Associated Press, Slash said: "I have no idea what's going to happen on that day. It's more like going into it with blinders on and just see what happens."

But Rose rebuffed any hope of reuniting, writing in his letter: "There's a seemingly endless amount of revisionism and fantasies out there for the sake of self-promotion and business opportunities masking the actual realities.

"So let sleeping dogs lie or lying dogs sleep or whatever. Time to move on. People get divorced. Life doesn't owe you your own personal happy ending especially at another's, or in this case several others', expense.

"I strongly request that I not be inducted in absentia and please know that no one is authorised nor may anyone be permitted to accept any induction for me or speak on my behalf."

Rose admitted when it was first announced the band would be inducted, he had mixed feelings.

"I was honoured, excited and hoped that somehow this would be a good thing. Of course, if Guns N' Roses were to be inducted it'd be somewhat of a complicated or awkward situation."

A representative for Slash said he would still attend Saturday's ceremony but had no further comment to make.

The current line-up of the group last performed in the UK in 2010, but they were bottled off stage at a concert in Dublin after they arrived on stage nearly an hour late.

Other new inductees due to be included in the Hall of Fame are the Beastie Boys, the Red Hot Chili Peppers, Donovan, and The Small Faces/The Faces.

According to the Hall, the Sex Pistols are the only band who have previously declined to be inducted.