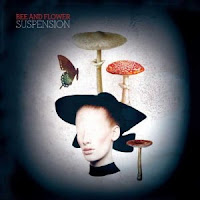 Bee and Flower – Suspension (Cheap Satanism Records)
For a label usually associated with releasing horror soundtracks or records of an outwardly macabre nature, the inclusion of Bee and Flower and “Suspension” into their ranks may seem a surprise – and they are only the second act signed to the label without links to satanic or anti-church movements.

For the New York and Berlin based band’s third album the core of Dana Schechter, Roderick Miller and Toby Dammit (Swans, Stooges) were joined, by Thomas Wylder (Nick Cave’s Bad Seeds) as well as a host of guest musicians and technicians of high credential - such as Martin Bisi, Ingo Krasus, Martin Wenk, Paul Watson and JG Thirlwell – giving them connections to the likes of Tindersticks, Foetus, Calexico, Kronos Quartet and The Dresden Dolls.

Schechter’s vocals, with their uplifting and perfect tone, are possibly a shade too bright when offset against the tracks of haunting and richly percussive, powerful-yet-under-stated rock. That said it certainly has some great moments such as the quite marvelous, if not metaphorically clichéd, “It’s The Rain.” For fans of PJ Harvey and any of those name checked above.
http://www.cheapsatanism.com/?lang=en
Willsk