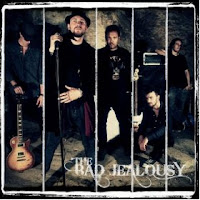 The Bad Jealousy - S/T (B&B Records)
A tough looking bunch on the sleeve, make no mistake, but you can’t always judge an album by its cover. "Intro" is a study in strings and a few distant background noises, and for a minute and a half you get to wonder if the wrong album had been pressed on this CD. Yes, I was quite happy for the Cult-esque "Genius" to get underway straight after, but I also had a hankering for more of the opening faux classical piece. Anyway, we kick off with two tracks about as far apart as Shostakovich and The Sex Pistols - interesting…

A very melodic band then, even if they do look like they’d dust you over should you meet them in the street. It’s AOR meets Goth, for an arena audience, and yet it works, and works very well. The Bad Jealousy have the power of bands like the fore mentioned Cult, but they rein it in a little, paying much more attention to making melody rather than full-on rock music. And with songs like "My Love" they almost expose their gentle side, all kind of semi-religious, and full of longing. Of course, it’s immediately followed by something harder, faster and stronger, but "Close My Eyes" is a love song too. Hard men with soft centre, who’d have thought it?

All in all, well worth a visit for anyone who wants their rock music intense and brooding, with a touch of class(ical).
http://thebadjealousy.com/
Kev A.