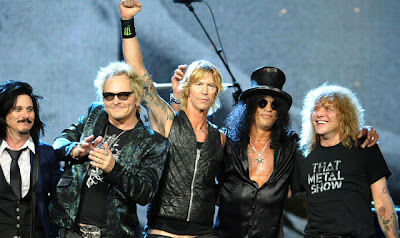 Guns N' Roses frontman Axl Rose has been inducted into the Rock and Roll Hall of Fame in Cleveland, despite his public rejection of the accolade.

Rose, who did not attend the induction ceremony on Saturday, declined the honour earlier this week, saying he felt neither "wanted or respected".

An on-stage reference to Rose drew boos at the event, attended by other members of the rock band's line-up.

The Red Hot Chili Peppers, Beastie Boys and Donovan were among others honoured.

Rose was not the only no-show at the lengthy ceremony, held at Cleveland's Public Hall in front of a 6,000-strong audience.

Rod Stewart also bowed out, a case of flu preventing him from being celebrated alongside members of The Small Faces and The Faces.

The Beastie Boys - only the third hip-hop act to enter the Hall of Fame - were also without one of their members, Adam "MCA" Yauch.

Bette Midler, Smokey Robinson and Chris Rock were among those presenting honours at a five-and-a-half hour event that climaxed with an all-star "jam".