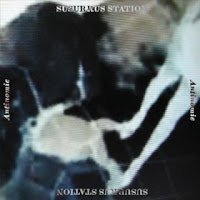 Susurrus Station – Antinomie (AIO Records)
In follow up to 2009’s “Add a Day Going West” Portland’s Susurrus Station release “Antinomie” (on Vinyl and MP3 download). For this outing their numbers have expanded - from the previous core of a multi-instrumentalist duo - to eight and like its predecessor the tone remains downbeat, gothic, desperate and is strewn with invention and African rhythms.

The deep and depressed opener, “(Assume the Worst and) Keep Up Your Spirits” buzzes with Congotronics. From there on Susurrus Station’s experimental bent takes some unusual turns and curious directions, where spaced-out bon-tempi keys can make way for semi-mythical tales of hellish femme fatales, accompanied by splintered tack piano (“Antinomie”). An opening clockwork pattern can feed into richly strung passages (“The Harmonist”) or a stifled hip-hop backbeat can tiptoe around whispered and wonky vocal harmonies (“Man Made Hands”). Further in, “Hell” and “Every Other Color Gold” have a cool percussiveness and an aged and dusty production that recalls Portishead’s “Dummy”.

Susurrus Station leads a fantastic excursion into the underbelly and cold conscious underbelly of the modern mid-west.
http://www.susurrusstation.com/
Willsk