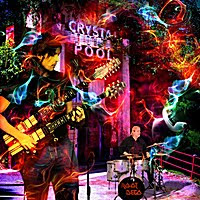 Root Deco - Crystal Pool (Independent)
Root Deco is guitarist Larry Vilchek and drummer Paul Johnson, together with an evolving group of guest musicians and collaborators. Their sound, which is rooted firmly in late ‘60s psychedelic rock, draws on both the British and American traditions, with stylistic nods to The Yardbirds, the first Grateful Dead album, Jefferson Airplane and The Stones, circa 1966. All good stuff, and the effect is accentuated by their approach to recording, which retains enough essence of garage (not a new scent from Mobil) to convince passersby they’re hearing something that just might be the real deal.

Their sixth album begins with “Tough Night”, it’s heavy rock structure teeters on the edge of Steppenwolf territory, but harmonica fills and an earthy, unpolished finish steers it back to their core ideals. “Dead By Morning” employs a riff that might have been originally located on The Velvets’ “Loaded” record, though the song and its arrangement feels utterly contemporary, in a My Morning Jacket / Kings Of Leon way. What I particularly enjoy about Root Deco is their willingness to make use of seemingly incompatible styles to augment their own method. The spiritual hoedown of “Good News Today!” is a case in point. It shouldn’t work, but it does, quite brilliantly. The straight-up, Southern-fried retro pop of “Little Black Book” is almost equally out of place, but just as good, and best of all are “Deserted Cities of the Heart” and “Big Parade”. Both seem to distill the Root Deco experience in a most agreeable way.
http://www.rootdeco.com/
Simon M.