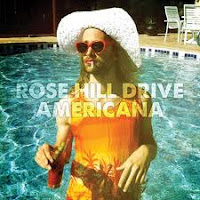 Rose Hill Drive - Americana (Independent)
On the release of their eponymous debut in 2006, Rose Hill Drive were rightly considered to be a workmanlike but highly derivative power trio, cast fundamentally in the Cream mould. Appearing on the bill alongside The Answer and Roadstar in support of The Who that year they impressed as a dynamic live show but stood out as the most obviously retro act among similarly minded contemporaries. If 2008’s ‘Moon is the New Earth’ did little to challenge such assumptions, then new release ‘Americana’ most certainly will.

The title might point inexorably in a root-wards direction, but this is dispelled seconds into the opening bars as either a red herring or a bold re-definition. Deep stoner grooves, psychedelic licks and wasted out-there vocals coalesce around a heavy heavy Monster Magnet-via-Queens of the Stone Age melange which propels the band punching, screaming, kicking and biting towards the twenty-first century. Gone is the blues jamming, in comes the pounding and jabbing, with a fiercely modern edge that should draw them to the attention of an audience far beyond the Classic Rock readership which formed the bedrock of their erstwhile fan-base. For those coming to it afresh this collection of vibrant standout tunes, including ‘Baby Doncha Know Your Man?’, ‘Pictures of You’ and ‘Psychoanalyst’, could be this year’s ‘Songs for the Deaf’.
http://www.rosehilldrive.com/
Neil B.