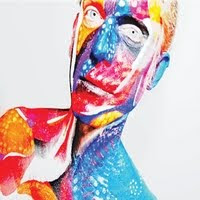 Matt Burnett – Burst (Independent)
Matt Burnett is an experimental singer-songwriter based in Austin, Tx. Apart from his solo recordings (there’s an earlier album called “things@now.good”) he’s also involved, or has been involved, with a variety of projects, including the Salvage Vanguard Theater, the Church Of The Friendly Ghost and Mongoose, and pursues his own noisier yearnings under the Odor Baby moniker. Details of all these groups and ventures can be found in the usual places online.

Needless to say when presenting his solo singer-songwriting side he avoids the more travelled paths and inspiration is drawn from unlikely sources. On his webpage, names like Stockhausen, Eno, Stevie Wonder and his dishwasher get a mention, and on the slightly menacing opening track “Honor Those Who Walk Alone” he appears to be combining enthusiastic strumming with something that might have featured on an early Death In June record. The electronically effected voice (is that a vocoder?) adds to the otherworldliness. “All Good Things” reins in the electronica and inserts what sounds like a banjo into the mix. The result is equally persuasive. “Anonymous Bloodsport” is noisy, though singularly melodic and Burnett’s voice is high in the mix. “Far from Here” brings to mind Jackie Leven’s moodier material and the fidgety, frantic rhythms of “Home Free” counteract its measured tune and vocal. You wouldn’t want to listen to an hour of it, but as a final flourish, it doesn’t lack impact.
http://www.facebook.com/mbmusicATX
Simon M.