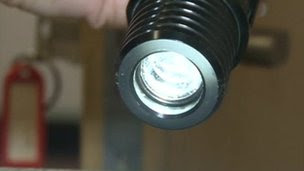 Part of a novel lost when a blind woman's pen ran out without her knowing has been salvaged with the help of a forensic police team in Dorset.

Trish Vickers, from Charmouth, had written 26 pages of her first novel.

But when she asked her son to read it back to her there was nothing but blank pages.

They called staff in the fingerprint bureau who volunteered their time and revealed the missing words by shining a crime light on the indentations.

Staff used the tool's bright light on the pages as it enhanced the shadows left by the pen strokes.

Kerry Savage, from Dorset Police, said: "Fortunately apart from one line we managed to retrieve the whole lot.

Mrs Vickers, who lost her eyesight about seven years ago as a result of diabetes, said she was "over the moon" with the force's work.

She said: "It's not as though it's a big blockbuster but as a hobby and something that is very important to me it was just wonderful that they put that time and effort in."

Mrs Vickers now writes by following elastic bands stretched across her page rather than using lines on the paper.

She describes her book as a "simple" and "pleasant" story about a young girl.

Although she does not know when it will be finished, Mrs Vickers said Dorset Police would be first in the acknowledgements.