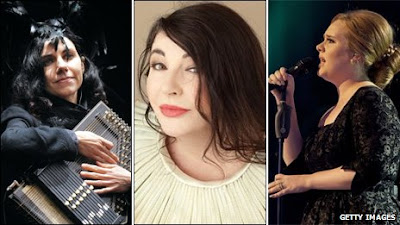 Adele, Kate Bush and PJ Harvey will battle it out for best album at next month's Ivor Novello awards.

Two of Adele's tracks, Rolling in the Deep and Someone Like You, are nominated for most performed work, alongside Take That's The Flood.

Rolling in the Deep is also up for best song muscially and lyrically.

The annual awards, to be presented in London on 17 May, celebrate British and Irish songwriting and composing and are voted for by songwriters.

Other nominees in the best song musically and lyrically are Florence and the Machine's Shake It Out and Ed Sheeran's The A Team.

Best original film score contenders are Life in a Day, The First Grader and We Need to Talk About Kevin.

The Shadow Line, Page Eight and Leonardo are all in competition for best television soundtrack.

Adele's second album 21 has won numerous awards in what has been a stellar year for the north Londoner.

The record recently overtook Pink Floyd's The Dark Side Of The Moon in the list of best-selling UK albums.

The LP has now sold more than 4,142,000 copies in the singer's home country, making it the seventh biggest-selling album of all-time.