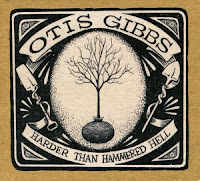 Otis Gibbs - Harder Than Hammered Hell (Wanamaker Recording)
Whilst no-one would begrudge Seasick Steve his overnight success of several years back, there were more than a few not entirely convinced of his ‘authentic backwoodsman’ image. It would be difficult to lay the same suspicions onto seasoned troubadour Otis Gibbs, whose sixth album of gritty and personal folk tales simply oozes experience and authenticity.

At its best it catalogues incisive tales of reflection, endurance and resolution whose titles speak for themselves: ‘Never Enough’, ‘Made to Break’, ‘Dear Misery’, ‘Second Best’. These are no tearjerkers though. Chronicled in Gibb’s increasingly familiar weathered brogue these are the words a fighter, whose gutsy sentiments are well matched by the robustness of his three-piece country ensemble. That said, mellow closer ‘Blues for Mackensie’ hits an unexpectedly softer spot to round off the set in style. He’s touring extensively around the UK in June and July including the Maverick, Larmer Tree and Sidmouth festivals and should be well worth checking out.
http://otisgibbs.com/
Neil B.