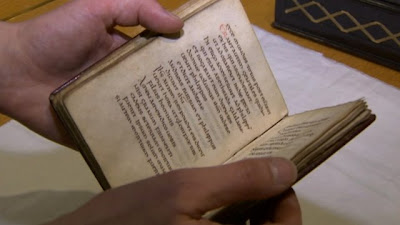 The oldest intact European book - the St Cuthbert gospel - is to remain in the UK after the British Library raised £9m to buy it.

The acquisition of the 7th Century copy of the Gospel of St John follows the library's largest fundraising campaign.

The book was sold by the Society of Jesus (British Province) to raise money for education and restoration work.

The manuscript, produced in the North East of England, was buried with the early English Christian leader on Lindisfarne in about 698 AD.

It was rediscovered at Durham Cathedral in 1104 after the coffin had been moved to escape Viking raids.

The library has acquired the gospel in partnership with Durham University and Durham Cathedral, and it will be displayed equally at the library and in the North East.

It had been on loan to the British Library since 1979 and the institution was given first option to buy it.

"To look at this small and intensely beautiful treasure from the Anglo-Saxon period is to see it exactly as those who created it in the 7th Century would have seen it," said the library's chief executive, Dame Lynne Brindley.

"The exquisite binding, the pages, even the sewing structure survive intact, offering us a direct connection with our forebears 1300 years ago.

"I would like to pay tribute to the donors who have made this acquisition possible.

"This was a once-in-a-lifetime opportunity to secure the gospel for the nation and we were both grateful and touched that so many people felt moved to support our campaign," she added.

The library's director of scholarship and collections, Caroline Brazier, said the £9m cost of the book was worth it.

"We don't know what an item like this would have actually gone for on the open market, but... we feel that we've negotiated a very good price."

The St Cuthbert Gospel will be on display in the Sir John Ritblat Treasures Gallery at the British Library's main building in London's St Pancras.

The first display in Durham is anticipated to be in July 2013 in Durham University's Palace Green Library on the Unesco world heritage site.

Dean of Durham the Very Rev Michael Sadgrove, Dean of Durham, said the book's acquisition was "the best possible news".

"For the people of Durham and North-East England, this is a most treasured book," he said. "Buried with Cuthbert and retrieved from his coffin, it held a place of great honour in Durham Cathedral Priory."

The manuscript has also been digitised in full and will be available to view online.