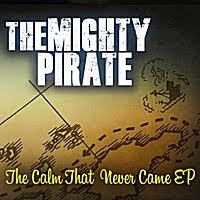 The Mighty Pirate - The Calm That Never Came EP (Independent)
Over the centuries, pirates have experienced a mixed rep. The romanticised 17th and 18th century rogues got to be played by Douglas Fairbanks Jr. and Burt Lancaster, and were decent swashbuckling sorts who got off on a good pillage, and always got the girl. These days things are a little different and I don’t see George Clooney liberating his inner Othello for the role of Chief Somalian Pirate.

Musical brigands tend to fare better; Johnny Kidd and the Pirates made some great early British rock ‘n’ roll, and sans Johnny, reinvented themselves as premier pub rockers. Singer-songwriter-tattooist The Mighty Pirate seems cut from the same cloth. Not a traditional rock ‘n’ roller or a pub-rocker, but I imagine he goes down as well as a cold beverage in the bars of his hometown, wherever that maybe. You see, The Mighty Pirate is something of an enigma; a riddle wrapped tightly within a mystery. I don’t know where he is now or what his real name is; it’s just the music we hear and the tattoo art we see, everything else is just a distraction.

As far as I can ascertain “The Calm That Never Came” is the debut release, a six-track EP of contemporary singer-songwriter fare, which doesn’t in any way overplay the image, and is decidedly easy to get along with. It does however show several sides to his writing and style. Slower, gentler songs like “The Ravine” and “Somewhere Bluebirds Fly (a Good Letter)” often give way to rockier, grungier tracks, like the emotionally forceful “Taking a Drive” or the jangly, rhythmic “Novocaine Dreams”. Fans of literate acoustic rock will find much hear to enjoy, and if body-art floats your frigate, then be sure to check out his website.
http://themightypirate.com/
Rob F.