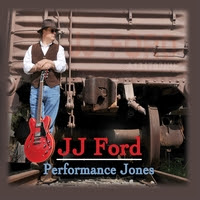 Originally from Arizona but now resident in California, JJ Ford’s take on country-rock and pop is certainly sun-bleached and bright. It’s also literate, occasionally touching and always easy to like. Ford’s a songwriter at heart with a list of influences that includes John Fogerty, Dave Alvin and Texas troubadours such as Guy Clark and Jerry Jeff Walker. He and his band accompany his words in a selection of roots styles, of which straight country is the unifying genre, though folk and blues often get a look in, and thanks to some astute writing, much of “Performance Jones” has a distinct pop edge.

The album begins with “Roads”, a rumination on the passing of time and the journey of life. It’s an instant highlight, and although the comparison may seem strange, Ford’s voice reminds me a little of Television’s Tom Verlaine, though in these surroundings the likeness seems almost abstract. The title track is just wonderful, though it owes a hearty debt to early Dire Straits, with lead guitarist George Nauful taking on his Mark Knopfler duties with determination and no little style. It’s the sort of track that’ll take over your iPod, if you let it. As will “Angel With a Tattooed Wing”. The story of the song is related on Ford’s website, but the details aren’t important. Instead soak up the words and fill in the gaps yourself.
www.jjford54.com
www.jjford.bandcamp.com/album/performance-jones
Rob F.