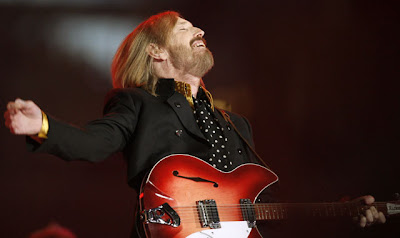 A security guard has been arrested following the theft of five of US musician Tom Petty's guitars from a rehearsal space in California.

Writing on his Facebook page, Petty said he was "extremely grateful" to the police and "touched by the outpouring of good wishes" from fans.

The arrested man was Daryl Emmette Washington, 51, of Los Angeles.

He was a private security guard at The Culver Studios lot, which is used for filming music videos and tour rehearsals.

Police Chief Don Pedersen said the break in the case came when the suspect attempted to sell one of the guitars at a Hollywood pawn shop for $250 (£157).

Washington was booked on suspicion of grand theft, said a police spokesman, adding: "We believe that there is a very strong and compelling evidence in this case."

Three other guitars belonging to his band-mates also went missing.

The band had previously set up an email address for tip-offs about the instruments' whereabouts, with a "no questions asked" reward of $7,500 (£4,712) for information leading to their return.

Known for hit singles including American Girl, Learning To Fly and Breakdown, Tom Petty and The Heartbreakers are due to kick off their US tour in Colorado on Wednesday night.

They come to Europe in June for a string of festival dates, as well as two nights in London's Royal Albert Hall.

The shows will mark the band's first major UK shows for more than 20 years.