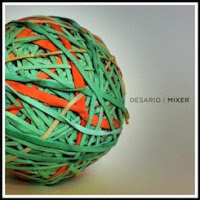 Desario - Mixer (Test Pattern)
This is quite an unusual mix (no pun intended) of Californian pop rock vocals, occasionally slightly off-key (as on "Airline") and New Order rhythms, with a dollop of indie slacker intent to cover up any possible gaps in the mix. If not slacker, then it’s a casual, almost lazy affair, despite the familiar rhythms that crop up again and again. The music seems to slide out of the speakers, even when the tempo revs up to classic indie pop speed, as on "Call Out Your Rivals", and when the vocals kick in it’s a mild surprise that it doesn't sound like Bernard Sumner at the microphone. A slight surprise, but there’s no disapproval of any sort, as the voice of John Conley fits the songs perfectly, and melody just flows through the songs without any rhythmic obstacles. It’s a smooth, fluid affair, with no sharp corners to either deflate the progress or cause aural discomfort. A good example is "Success (Is Ours)", with a more vibrant approach, and not a million miles away from what The Smiths were doing so well back in the day.

Their strength does lie in the melody of the songs, though the arrangements have to rank highly too. It’s a very pleasing listen, but without any real high point, which negates any great comedown that you tend to get after a sizzling track ends. Come on, you know what I mean! By the time we get to the album mid-point, "Victoria Island", we could be thinking of the early incarnation of The National (circa 'Sad Songs For Dirty Lovers’), but with a looser, lighter approach, without the deep vocals and heavy drumming. The best is left for last, as "June" is a smart five minutes of summer love, with a heartfelt vocal, throbbing rhythm, and growling guitar.
http://www.testpatternrecords.com/
Kev A.