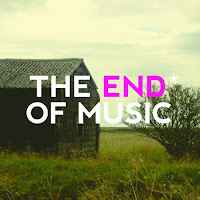 De La Mancha - The End Of Music (Karaoke Kalk)
I only had to hear "Ursa Minor" to know that this was music for me. A Spanish name, but a Swedish band, in fact two childhood friends (Jerker Lund and Dag Rosenquist), who have developed their sound from a love of My Bloody Valentine, Led Zeppelin, and more recently (and more obviously) Sigur Ros and Red House Painters. Nothing wrong with that!

Again, it’s the melodies, both intricate and lush, that form the base for all that they do. They create a sound around their words, and gradually, within each song, let it slowly build and coalesce, until a peak is reached, and then they move on. Hushed vocals are surrounded by beautiful, meticulous arrangements. I doubt that they themselves have any doubt once they decide upon each song project. To produce such sombre yet agile work as this you have to be sure of the direction from the outset.

Last year I spent a week in Stockholm, and had the luck to have fine, sunny weather. This music reminds me of this noble city, the wonderful parks, the glorious harbour views, the relaxed vibe and warmth that emanates from the streets we walked. I would have been happy to have this as my soundtrack then, and I am happy to reminisce my city break with it playing now. Thank you, my friends, for making such a majestic, delightful record.
http://www.karaokekalk.de/
Kev A.