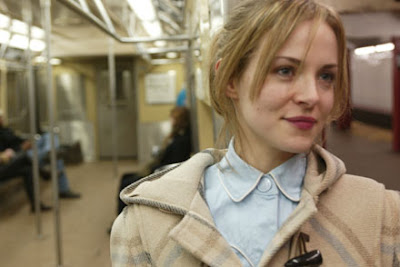 Gemma Hayes - Let It Break (FullFill)
Tipperary native Gemma Hayes has managed to live a charmed professional existence since her Mercury-nominated debut, 2002’s Night on My Side. A comparative big-hitter in Ireland, the rest of the world has been a little cooler to her dusky, earnest indie-pop, basically allowing her creative freedom without having to scrabble for a living or kowtow before a demanding industry. Let It Break is, then, the latest summit of that creative freedom. Basically, she could’ve recorded absolutely anything.

Admirably, Let It Break is full of intriguing ideas and well-marshalled sounds. It’s evocative when it needs to be, songs arc in the right places to snag the heartstrings, and all signs point to an accomplished fourth album. The trouble is that it’s not a huge amount more than that. It’s faintly embarrassing to be asking more from an artist that is clearly giving a lot, but there are sags and flaps where there should be monumental peaks. Things start brightly, though: the mood-piece opening of Don’t Let Them Cut Your Hair and the following There’s Only Love make perfect late-night travelling soundtracks.

Not dissimilarly, one can hear the likes of Death in Vegas in the album’s first third, and with Sorrow Be Gone Hayes sounds like a lighter version of Meredith Godreau of Gregory and the Hawk. It’s revelatory stuff and rewarding enough, but after this strong opening a curious emptiness takes over. Plainly the ingredients are assembled for something more spectacular, but by the time we’re halfway through we need to hear it expressed with more wit and invention. Breathy and morose on Brittle Winter, her vocals aren’t the match of the beautiful choral arrangement that lurks in the background. Likewise, sketches like That Sky Again serve more as palate-cleansers than statements of emotional intent.

Perhaps it’s unfair to expect more, but Gemma Hayes most definitely has the time, talent and exploratory nature to achieve it. Let It Break is a fine achievement, certainly, and only faulty due to some of the more by-numbers pieces within. It would be fulfilling to hear her really stretch herself on a fifth record but, for now, it’s enough that she can coast and still succeed with her fourth.
Daniel Ross (BBC)