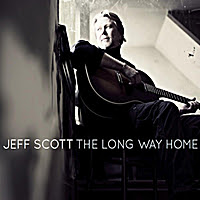 Jeff Scott - The Long Way Home (Blue Boundary)
A native of Detroit, Michigan, Jeff Scott has recently been nominated for one of the city’s music awards; worthy recognition for an artist who initially set local radio alight with his voice, singing his original material and working with the stars of Detroit’s jazz and rhythm ‘n’ blues scenes. That was before making his national breakthrough with The Big Picture, who shared stages with Hall & Oates, Richard Marx, Smokey Robinson and many others.

He may have put his music career aside in the ‘90s to pursue business interests, but there’s no denying Scott had already paid his dues, notched up the road miles and played his share of places he’d rather not go back to. He returned to recording in 2010 with the acclaimed “Begin Again” and has cemented his come back with his brand new collection, “The Long Way Home”. It’s a fine album; Scott has a big soulful rock voice, somewhere between Steve Winwood, Scott Walker and Neil Diamond, and he writes and arranges songs that would sound perfectly at home on grown-up wireless. Indeed, if Scott or his label is interested in suggestions for radio singles, I’m happy to oblige. “In California” provides a near perfect launch, it’s hooks are plentiful and adroit, and it possesses a chorus that sticks like industrial grade superglue. “Half-Broke Horses” is almost as addictive, and if it lacks anything in pure AOR pop smarts, it more than compensates with retro cool keys and delightful harmonies. “Burn My Bridges” is tasteful and refined, with the pulling power of a late ‘70s James Taylor classic and “Ship of Fools” is vocally gorgeous, and features some elegant brass. This is a second chance to become acquainted with Jeff Scott’s music – don’t let him pass you by this time.
http://www.jeffscottmusic.com/JeffScottMusic/Home.html
Rob F.